I HAVE APSOLUTELY NOTHING ELSE TO SAY EXCEPT


and well I don't have the heart to write anything else abbot this miserable team and game.
So for your convinice here's a petition you can sigh that somebody made and well here's the lyrics to
Don't Worry Be Happy. Hope it helps you because I have absolutely nothing else........

Okay maybe you didn't get it from the title, or maybe you've just been tricked in the past and din't think the title meant anything. Well it does. You see I had just got done hearing about the Royals 0 - 7 loss to the Los Angeles Angels. A loss that made 4 in a row. A loss that made the team 1 - 8 in their last 9 games.
A shutout loss, no runs, not a single one, none, zero, zip, ziltch, zadda. In fact when you don't score a run you can add up how many games you will win.

Oh and who could forget that today was Faith And Family Day? That's right kiddos, after getting dissed on for 9 innings the fans where treated to hear Albert Pujols and Josh Hamilton talk after the game (Luke Hochevar as well). Alright I've said it before I like the concept being a Christian myself, but do I want to hear Pujols and Hamilton after they just beat us ? Heck no I don't.
Maybe that's just me I don't know I wasn't there. If you where I'd love to hear your thoughts on it.

But basically that's where my mind was today. That and thinking about the Memorial Day weekend BBQing I was about to start with this evening.
(A heartfelt thank you to anyone that has or is serving our Country. Thank you so much)
But first I decided to after much thinking to buy an elliptical to get in shape so I went by Dicks to buy one. And then I had to wait an hour while I filled out a credit card application to save 10% ($100 is a $100) only to not have it go through. And after much trying by the associates. Okay that's cool it's not there fault. They say to bring in the card when it comes and I'll be refunded then so no big deal. Well then my debt card wouldn't go through. I understand this as well, but it's been an hour and a half. So I ask the Store Manager if the ad will still be good Tuesday (Delivery and Installation for $69 normally $120).
(I figure I'll just go to the bank and withdraw some cash and come back then)
And he says; "no". So I say, "Well is there anyway you can hold it for me and I'll be in Tuesday"
To which he replies, "It's an automatic thing outside or company there is nothing I can do about it".
The flipping store manager can't do a dang thing for me. Can't even give me $50 off to even it out. No after a n hour and a half all I get is a big screw you from the store manager at the Dicks Sporting Goods.
(So if you know of a good elliptical for sale from a legit company let me know, okay ?)

I know, I know your thinking why do I care about this ? Well I'm getting to the moral of the story. That and to this;
Which I will display on the blog until I get a letter/email of apology (or just get tired of it.)

Okay sorry I was getting off track again. The moral of the story is right after all this I log onto Twitter and see this;

So I let you know how angry I am with Dick's and this team's continual losing.
But that's really nothing at all, no I'd be pissed to the ∞ if that where to happen.

The Short Fall Down The Hill

This is the time of year when it falls to pieces. I have no words to say. Year after year it gets hard to find new ways to say the same thing. Below .500 and falling. And that is where the Royals set once again. In fact all I can really offer is this photo from tonight's loss; 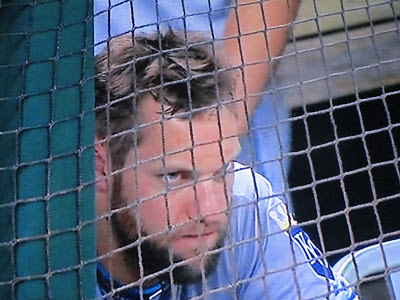 And maybe a chance that this team can find away to steady the ship.
But I've grown to be a callused old man (fan) now and I didn't believe the hype at the start of the year or at the height of the 12 days or so in first place. So yes, I guess I do get some sick satisfaction from being right. But I want to be wrong I so want to believe I'll see a Royals team in the playoffs before I die. But I'm not the same 16 year old I was when I started this blog, nor is Gordon the same prospect , neither are you the reader. Face it we're all growing old and running out of time.
Time to see, to hear, to feel, a Royals we deserve. One that won't disappoint us and break our hearts....
Posted by Ray W at 11:20 PM No comments:

Mother Nature Is A Terrorist 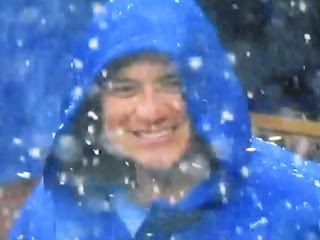 Well even though the Royals came within 3 outs on defense the great start by Ervin Santana never happen.
Because of rain....that became snow. (On May 2nd)
And well,
Because Mother nature is a terrorist......