No we're not talking about the Nine Inch Nail's album that spun a song that would eventually be covered by Johnny Cash. And a whole lot of other songs I'm not going to mention....
But what we are talking is almost just as warped and just as brutal. Filled with hate and pain and everything evil in America.

Just look at the NIN cover real closely and you'll see it: 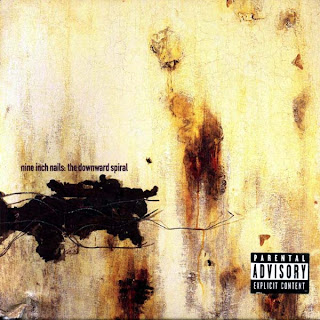 BAM !  A Parental Advisory Explicit Content sticker. Do you see that ? See it's that time of year where the Royals who start out hot fizzle into the 90 loss team we know and love (despise).

I could go dig up past results and examples but that would be to painful.


See this is the scary part of the season where the Royals tend to:

I know, I know, it's innocent enough back to back losses. But the next thing you know:

Lemmings of death jumping into a downward spiral.

And the fact that both of the losses where pretty well blowouts to a lackluster Cleveland Indians team, well.  it really starts to make you doubt the whole "Our Time" "Come To Play" slogan.
Then again, maybe I'm just paranoid and have trust issues after years of abuse and neglect from my favorite team.  But hey, there are always worse things that could happen.

Let's just hope James Shields can help us get back on track tonight against the jerks that are the Rays.
Posted by Ray W at 1:57 PM