It all started 5 years ago with this little post:

Ah wow isn't neat how these just seem to pop up out of no where. One minute their was not a Royals on Radio etc. but now their is. Pardon the progress (yeah it really is new) so what if it's not a "fancy" blog with Royals photos everywhere isn't it the words that count?Ah yes the Royals of Kansas City maybe this is the year we win 85 games, or by an act of God make the playoffs in which case their will be hundreds more Royals blogs. But tonight thier is just one new Royals on Radio etc. maybe someday this blog will be quoted in Royals Review or ranked among the many great Royals blogs with names like: well look for yourself. But for right now enjoy the newness. While I enjoy some sleep and look forward to a great 2008 season of Royals baseball.

Only to be followed by my first real post where I made fun of Micheal Warren Marroth, a start that not many blogs can duplicate.

But the fact is after a 2 year struggle I came up with only two viable options:


And alas, I've got to call it a day. It seems like so much has changed of late that it's finally time. I did always hate blogs that only updated once in a blue moon. And so I decided it's best to go out on top. Even if RoRetc didn't change the course of the Royals blogosphere I hope it at least made you laugh, or think outside the box. I hope you enjoyed the RayW awards and Royals Merch series as much as I did.  We might never have gotten famous but we did get linked on MlBTR once and appear on a radio program.
I'll probable keep the url until I get sick of paying $10 a year, or maybe keep if forever in hopes of a return from the grave like a band on kickstarter or a zombie. (But I doubt it.) And you can always friend me on Facebook or twitter.

The past 5 years would never have happened without the following people and organizations:

Also absolutely no thanks whatsoever to:
Corey Hume, Linda Smith, Rex Hudler, the Royals player who told me to stop bashing Trey Hillman, or the St.Louis Cardinals fans that are annoying as heck.

Again, thank you the readers. I never set out to have people read RoRetc but when they did it was something special and for that I'll always be grateful. Go Royals !
Signing off for the last time,
Ray W 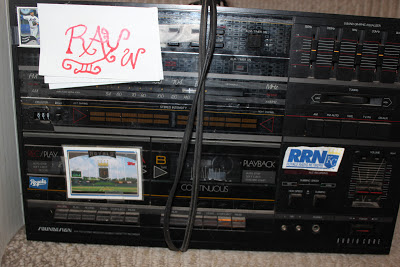