I think Fydor Dostoyevsky said it best with his hit novel Crime and Punishment:


"At the beginning of July, during a spell of exceptionally hot weather, towards evening....."

Not really sure what that has to do with much of anything really, other then where will the Royals be in the beginning of July ? I mean with the Tigers addition of big Price Fielder it's going to be that much harder to compete in the AL Central. But nine years wow seems like a long contract for such an, um, rather big guy.

So with money and length running through my mind I ended up looking on the craft site Etsy and found some, well, uh, rather interesting  Kc Royals stuff. And therefore I must present you..... Well first off we have this lovely Royals flower hair piece that would lovely on just about everyone. I mean how could you not look great in it ? With this your face would look as Sunflower. Here we have another cute little thing, a logo magnet. Face it most of our fridges are either covered in a cupons and magnets of our insurance agents and such or your kids art work. So why not having something that is cozy yet suave.

Well you can for only $2.50 from AuntCCcreations In keeping with the current trend we have an awesome hat for that little person in your life. Although the listing says you can get adult sizes made. It looks great but no word on how well it'll protect against a fastball to the head....

Yours for the mere price of  $ 25.95 from thebabykeeper Royals baseball, Winnie The Pooh, and your name.What is do you need in life ?

Yours for only $7 from TeamsandToons How often are you going to get married ? I mean surely your not planning on getting married 7 or 8 times, and if you are no one is going to really going to care after # 3 or 4. So hopefully you'll listen to me and only get married once, and therefore it needs to be unforgettable. And alas Royals garters.    I mean what guy isn't going to try and catch that ? So make your wedding one of a kind with this.

Okay I know what your thinking, usually these Royals Merch series I do have some sort of crazy thing at the end. And why should this be any different ? Bam !
Her and his G-Strings. Lined for comfort even. (Or so it says)
So yeah since I know you're dying to get them sent your way here's the links.
Hers:$ 7.99
His: $8.99
From pmtresurechest.

I hope all of you in the Midwest have been enjoying the beautiful day today, and maybe even you got off today for Martin Luther King Jr day. As promised here is the nominees for the 2011 Ray W awards as chosen by a group of world famous Royals bloggers.
Here is where you help decide the winners, just comment or email me with your first (3 points), second (2 points), and third place (1 point) choices for each category.
Voting closes at the end of January, be sure to let everyone know. :)
Thanks, and good luck !

Special Achievement Award* Vote for whoever you feel like
Matt Treanor for taking some amazing hits behind home and spending several months in AA when he didn’t have to
-Or-
Billy Butler for getting the best nickname in recent Royals history, "Country Breakfast"

Attendence, and whtat Underground Music has to do with it

On this date (January 15th) 3 years ago I had a post about what the Royals Radio Network stations were "jamming" (or lack there of) when the Royals games weren't on. And well not a whole lot has changed in 3 years I mean we now have a "Top 40 pop" and "variety" stations but where are the underground and scene radio stations ? I mean the numbers don't lie, Kansas City was 27th in total attendance last year....

But on the other side of that spectrum the Phillies and Yankees were # 1 and 2 in attendence. And you have to ask yourself, "Self why is this ?"
To which your answer was maybe: "They are both Winners"
Well I'm sure that your inital thought was because they are both perinial winners.
Whyt'd I even ask you that ?
But because that is what you were thinking,
You are mistaken......

See New York and Philly are both huge in the underground music scene, obviously popular with there fans. Okay maybe not so much in New York as they are more gangsta.....
But for sure for the Phillies whom have a huge fan in JB Brubaker lead guitarist for Metalcore powerhouse August Burns Red.

So yeah it's all about reaching the underground kids and getting them hooked on Kc Royals baseball.
Because let's face it the current formula isn't working as great as it could be.
(Still I'm sure we'll outdraw the Pirates in 2012, want to bet on it CH ?)

So Mr. GM Dayton sir, if your reading this let's get a Underground Day at the K where we can get all the punks, goths, scene, and hardcore kids to the K and get them addicted. Hook them the mouth and reel'em in like the catch of the day. Because let's face it the best we have now is:


A: Garth Brooks whom my grandpa says "screams to much"
or
B: Ke$ha dating Aaron Crow which I have no clue if they are still together or if she even still has a career.
or even
C. Some WWE wrestling personality

So yeah... can someone please tell me how that relationship is going ? ET won't they are to busy trying to tell me about the possible Tim Tebow - Katy Perry (ex-Brand) thing her folks are supposedly pushing.

So in closing I think it's obvious the Royals NEED a bigger presence in the underground music of Missouri, Arkansas, Kansas, Nebraska, Iowa, Oklahoma, Wyoming, and South Dakota.
So, at the very least, the RRN needs to find a underground style radio station or something.
Because let's face it, we're going to have a fairly good team and those seats need to be filled.

Heck maybe even a tattoo or piercing night at the K would work.........

Okay, same broken record. Or at least scratched, like my "Best Of Leon", Leon Russell album.You know were it keeps skipping back and forth without letting you know whats happening. And why did it have to be on the song Roll Away The Stone ?
I mean you guys know by now, how I go through these long droughts without posting and always come back with a lame," I was about to call it quits because of blah, blah, blah." Posts and this is no different.
BUT, it's still a fairly okay read.
And frankly here of late it seems like the Royals almost don't want me as a fan !
I mean the last time I was at the K, I forgot a pen for keeping score so I asked if I could have a pencil but of course they didn't have any so I had to buy a $5 pen which broke as soon as I got home.
See: 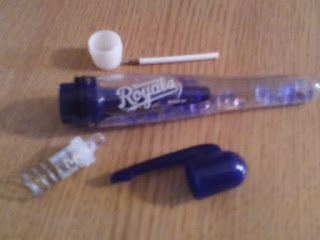 It's been setting on my desk like that all winter collecting dust, making me question why if I would ever post again.<--- (See I told you I was going to whine and moan)

But then came the news that the Royals Caravan would be back for 2012 ! But is it anywhere near California, Mo ? NOT AT ALL. No Jefferson City, no Columbia, nope.
But hey they'll be in Springfield ! Checking out the Cardinals AA facilitates no doubt. I mean how low is that ?
And besides that when you google "2012 Royals Caravan" the first site that pops up is to build a 2012 Dodge Caravan. So I did....

But hey at least it's not all been bad since my last post (only God knows when that was), we now have Jose Mijares, Jonathan Sanchez, and I've got to try and remember how to spell Yuniesky Betancourt again !
So it's all good....

Well at least that's what I thought until this morning on my Facebook feed I read:

And that had to be responded to right ? I mean first I get igonred for the Blog Your Way to the K promotion (never letting that one go) and now they want me to let Bruce use MY original stand up comedy ? For free ? Really ? I mean love isn't a one way street. I can't keep giving it out without getting some love or at least wins, back.
But maybe for Mr.Chen......
Knock, knock....

In closing I just want to say that I'll always be a Royals fan unless they do something EXTREMELY wrong & dumb, just like I'll always be a Raiders fan.
But still I had to ask myself, why keep this blog when there are so, so many better ones ? And the answer is fairly simple. Unlike everyone else I don't want to be the next Dutton, or Mellinger, or even *:gasp:*  Posnanski. I just want to be (as far as I know) the only Royals blogger with a lip ring. I just want to haunt the internet my opinion, and the occasional funny post or interview. Without really caring if it looks like a 12 year old wrote it.
So tomorrow I'll post the nomines for the 2011 Ray W awards, be sure to check it out and help decide the outcome. Spring Training and the best team the Royals have had in a long while is just around the corner...