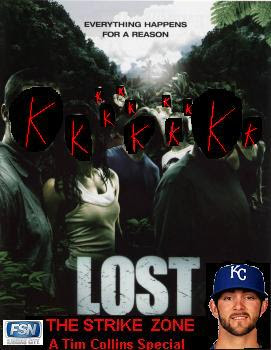 A Poemish thingamijigger
Tiny Tim
Obviously Tim Collins has forgotten how to throw a freakin strike.
Watch my twitter feed explode.
Damn
Angel Campos is an ass.
And I'm not in a good mood, seriously that game has really ticked me off.....
Eh I'll get over it, and O'Sullivan will find a buffet.
Life keeps moving on.
Posted by Ray W at 5:56 PM 4 comments:

Well winning makes just about everything better. Face it being 19-17 and only 4.5 GB in the Centreal and 2 GB in the wildcard on May 12th is pretty impressive from a team I thought may flirt with 100 losses. I've been trying to post for quite awhile but my work has been all day. And winning makes people happy, makes fans come out of the wood works. For 3 years I've been "the Royals fan" at the greenhouse with a few exceptions. Now their is another guy who sports a Royals hat and another guy told me "Go Royals" and even mentioned Hosmer. On top of that what a game last night. The Royals pitching did an amazing job of stranding Yankees. New York was playing like the Royals of the 00's and Kc just wouldn't give in. Best moment of the night though was Eric Hosmer's first MLB home run, win or loss it made the game memorable. But of course Eric wasn't done.(link)

But the side effect seems to be against Alex Gordon and Butler:

Obviously Alex had started to cool down before that but I just thought it might be worth pointing out.
Also perhaps maybe Butler is (1 for 13) .077 AVG also being somewhat affected by Eric ?

The Jays have released Scott Podsednik, whom I'm sure still relishes his time in Kansas City last year.

I'm sure you've already heard but former Royal Todd Wellemeyer has retired. I never once cared for Todd (Hellemeyer as he was known), cared for him even less when he pitched well for the Cardinals against us. But I wish him the best in whatever comes next for him.

The Royals are most likely looking for a college starting pitcher in the draft.
“They're not going to win if we don't find young, affordable pitching," Moore said.

Finally The Royals Blog your way to te K promotion is in full swing. I haven't heard anything yet so I'm kind of getting worried that I might get snubbed. It'd be a shame because I'm still the best Royals blogger in California, Mo, and one of the top mid level Royals blogs. So here's hoping for a call or email soon......
Posted by Ray W at 6:00 PM 4 comments:

So it's not like I've not, been following the Royals in the last couple games. An ugly as can be 0-6 road trip, followed up by a 3-0 sweep of the crumbling Twins. And I'd wish I would have posted something on fellow straightedger C.J. Wilson's dominance over us, or Jarrod Dyson's mad speed skills and an 8 run inning, in the Royals favor ! Incredible stuff. But yet I was a jerk. I ignored my blog. To busy with work... and my new PS3. Of course I'm behind the times but still I got addicted to The Show and "The Road To The Show". So while the Royals were defeating the Twins? I was listening to Denny while my created self was tearing his MCL pitching for the Durham Bulls. Gotta love it. I'll try and get some real stuff posted later.