Gosh this is awful, just. Another horrendous contraption by MLB.
Sure a couple guys is fine,and somewhat enjoyable.
I completely agree with honoring Jackie Robinson for all he did for baseball and for this country in general with what he did.
But every single player ?
Are you kidding me !
Look at the scoreboard and now I have no clue who the heck is pitching in any other game without looking it up. It's like something out of a Twilight Zone !

I mean seriously isn't there ANY thing else we can do to honor Jackie ?

(Broken record time)
I mean gosh, first destroying EA Sports MVP baseball, then Upper Deck, now this ?
Seriously look me in the eye when I talk about Topps being the exclusive trading card of MLB and try and convince me that it's not that bad..... There just might be blood brother.
Because baseball wants instant replays, monopolies and to spit in fans eyes.
God Bless Bud Selig, he's such a a$$
And believe me if the Royals weren't winning this post wouldn't be readable !
Posted by Ray W at 9:10 PM 1 comment:

From the Kc Star:

Yost has no intention of following his predecessor, Trey Hillman, in banning such slides. Hillman issued an edict last year when Alex Gordon suffered a broken right thumb in a head-first slide in spring training.
"There are a lot of people hit by cars crossing the street, too," Yost said, "but I still allow my players to cross the street. People get hurt playing this game.
"If somebody gets hurt from playing the game hard, you put someone else in there until (the first guy) gets healthy. You can't stop playing the game hard.


"If we had our druthers, would we rather have them slide feet-first? Yes. But some guys slide head-first. It's a reaction. Guys play with their instincts. They go out and play, and you let them play."

And that is why I like Ned Yost, his aggresive play the game all out style. Heck if we start railroading opposing catchers at the plate and playing all out, "dirty" by some people's standards (but still extremely legal) I'll be in love with Ned. But at least this is a start, and darn good one at that.

A Few Other Things:

Remember last week ? Bruce Chen was being pounced on by everyone ? Except me !


"I believe Bruce Chen deserves another start without all the wind, if he still can't turn it around then it's time to pull him."

Well yeah after today's game we realize that without all the wind of last Sunday Bruce is an AL Cy Young contender with a flair for strikeouts. Sure I doubt if it lasts but let's be honest Bruce is exactly what the team needs right now. Not an ace but not a has - been - either. And  besides he's always smiling !
Overall the Royals have been playing some pretty strange baseball. But you've got to like the bullpen. Tim Collins and Aaron Crow are both superb so far, and Robinson Tejeda continues to be a good set up man.
And BRYAN PENA ! Superstar catcher ! Reminds me of why I sponsored his Baseball Reference page in 2009.

Breakdown.
Oh snap, you'd think a 5-0 lead would hold up but after Sunday and today, it's obviously not. But seriously a 3 run lead with Joakim Soria on the mound and only one out away from victory ? I thought that was pretty well set in stone.
And it's not that big of a deal, at all. I mean everyone has an off day here and now and sometimes luck just isn't on your side.
But I'm sorry.
First place in the divison is super great but when the opposing team commits four errors and you still find a way to lose, well something is wrong. Sure the run in the bottom of the nineth was superb but once O'Sullivan came in it was obvious the end had came. Fact is it never should have even been close.

Overall the opening home stand  was one sloppy disaster after another for the Royals, and only by seer luck are we 4-2, six games in. The team has missed numerous opportunity's for a decisive and quick victory (the last three games) and has a pension for blowing 5-0 leads. I hate to sound like this, but is it to much ask for a team that can get ahead early and win without being sloppy? Oh well it's only loss number two and I know there will be many more that hurt worse, but still the Sox commited four errors and we lost, four errors to none....

The Good:
The Bad:
The Meh: 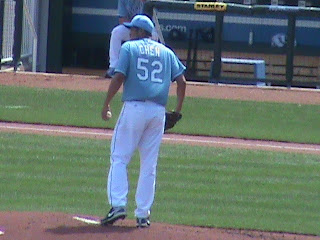 Well well, the Royals are four games into the season and already in first place. This should really come as no surprise to anyone who has been a fan for an extended period. Seems like ever year we get out to a blazing hot start only to curtail by the end of April. And after missing opening day because of work, I was thinking that more then likely this season would be like 2010 and I'd continue my decline of interest in the team (sport). But then I watched the next two games on FSN Kc. (I also listened to Fridays game on the radio while watching, and I must say Denny's excitement in the calling of Kila's walk off homer made Ryan's dry call of the same play almost embarrassing.) And I was still a loser because I didn't post anything after those first three games. I really wanted to but I couldn't find time and all I's really say anyway was that I love Aaron Crow, and Jeff Francoeur was slowly growing on me (As a gamer), and that my family didn't seem to grasp why I didn't like Melky Cabrera. But then a friend gave my family 4 tickets to Sunday's game, my first Royals game since 2009.(21st overall)
Sunday's game
Well it all started with meeting Royalman in the parking lot at the K, at which point he said the wind would help the Royals, but I said it'd hurt Chen but didn't get to go into a statistical breakdown on why, before he had to go. Once inside it was obvious that the New K rocks, it's the perfect baseball stadium. I walked around and toured the Hall of Fame before dad convinced me to buy a scorecard and score the game. (Not something I'd planed to do.) And because I was standing in a 10 minute line at the team store I missed opening pitch. It was an amazing baseball game time at the ballpark (all 4 hours and 46 minutes of it). I sat in section 210.

It was the usual casual Sunday crowd, of parents and children, lovers, and the rest.
Overall it  was a pretty sloppy game for the Royals, no way the game should have went into extra innings. After we blew the 5-0 lead it was exhilarating to see a Royals team not roll over and die. But after scoring two in the ninth the game really should have been over then. When the Angels bring the infield in and also bring an outfielder in, (with one out) you really should be able to score the winning run. And although I didn't here him say it to start the bottom of the 9th I know Denny was saying lead off walk in the late innings of a close baseball game....
The aggressive base running, solid fielding and excellent relief pitching (exception being O'Sullivan) though is what made the game so enjoyable.
Now I'll just post some random thoughts: