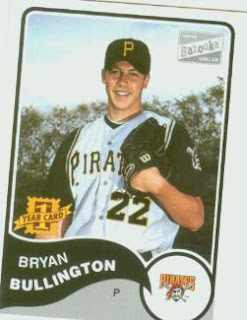 I always liked that card a 2003 Topps Bazooka.
But like so many things in life Bullington's career went on a path that no one could have guessed on draft day 2002 when the Pirates made him the 1st overall pick.

But as he struggled with the Pirates, Indians, and Jays there was always that inkling that the #1 overall pick would eventually prove everyone he could do it.

That subtle faintness like the breath of a smoker even hours after their last smoke, as faint as it is it's still there.

But as the years passed by the smiling rookie card would be all that Bryan would be remembered for.

With his dazzling performance in today's game against the hated Yankee's (sorry Yankee fans I can't stand your team) he became an instant Royals cult hero.

8 Innings of scoreless pitching against the hated Yanks leading to the Royals to a 1-0 victory for the first shutout of the Bronx bombers since 1993 and the first 1-0 victory since 1972. (Thanks to Royals Kingdom for that info)

So after 7 years of toil Bryan Bullington has finally won his first major league baseball game, and because this isn't a playoff team the win couldn't have been any bigger. 2-2 split with the Yanks way to go guys.

PS. In case you didn't know it let me quote Yankeeist:

There you have it.
As always thanks for reading.