And then the season is finally over I used to think this late in the season it didn't matter but I was wrong. Maybe it's just losing to the Yankees but when Hillman brought in Fransworth and then comes up with these horribly lame excuses. I mean I get giving Joakim the day off but Farnsworth ? Really ?
Why not Carlos Rosa ? Heck just about anybody. But Farnsworth ?

Yes Hillman and Farny will both be back. Oh how to contain the joy ?
Perhaps we could bottle the joy ? Or pickle it ?
Or maybe there is none.

Look at it this way if Zack doesn't win tyhe Cy Young the season is a wash folks.
Sure we learned plenty about a lot of guys but that won't matter if there are not any changes.

Now that we got that out of the way:
Thank goodness Betancourt got the homerun but let's be frank he's erroraputamus.
DiNardo just hasn't been able to get it done at the big league level tough because he's a great guy.
I like Anthony Lerew from all I've heard about him. I mean tattoos.....

I was at future's night and let me say this. Moose just oozes confidence, just as well confident slicked back hair. Like I said seemed very confident.

All the Prospects were very nice. The Dominican prospects seemed a little overwhelmed though.

~~~~
If your at the K next year you've got to check out the HOF
It's great for any Royals fan.

I need to rest from my weekend I'll be back in a day or two with some better more in depth stuff.
Posted by Ray W at 8:52 PM No comments:

Double Dose of Happiness in the Mail Today 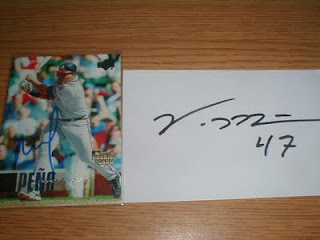 Got them both in the mail today. My two guys since Spring Training
Brayan Pena and Victor Marte. Thanks a lot guys made my day.

Here's hoping for an incredible sweep of the Red Sox tonight.
Posted by Ray W at 5:26 PM No comments:

Reading between the lines

When you can read between the lines.
This article might as well say:
Royals trade Carlos Rosa, and Kila Ka'aihue to Cubs for Milton Bradley.

Also who thinks the Royals won't give Bartolo Colon a couple million and will pass on Webb if he's available ? Because I do.
Great win for Tejeda boy if he started the year in the rotation maybe we'd have two Cy Young candidates and be in the same position as the Cardinals right now.
Hey you can dream a little.

But when you're dreams are shattered by the likely trade above, well don't blame me.
I'd have included cash in the deal.
Haha
That's a joke.
Posted by Ray W at 6:08 PM No comments:

I'm not going to tell you the title

Well I could say something about Luke Hoche's great start yesterday. Something along the lines of wonder how his season and ours would look right now if we'd discovered he was tipping pitches back in Spring Training.

Or maybe how the Royals just keep on surging in September ? Maybe we could get MLB to split the season into two halves like in the minors.
1st Half Opening Day - August 31
2nd Half September
Ok thats just stupid but seriously I don't know what else can be done.

Then again the Royals just signed Aaron Crow. Can't believe it took this long. But hey at least for AARon* he got a major league deal. (*Not quite AARP status yet)

And this post is not orginally what it was going to be about.
Originally I was going to write about how great of a monster seaon Olivo and Buck were having in the HR department while still lacking in others and how that means Olivo and Buck will most likely come back next year.
Only I don't want to think about next year right now I've already packed up almost all my Royals stuff for the winter. Sorry for all the negativity.
Maybe I should rename the site Gothic Royals ?

And Now the main event

LHP
28 Years Old
2009 Stats so far
~~~~
15-9
4.17 ERA
174.2 IP
179 K
77 BB
And remember we traded him to Colorado for basically Coco Crisp (JDLR begot RamRam begot Crispy).
Overall it's been a great seaon for Jorge and the Rockies. Maybe this is the best season Jorge will ever have. Maybe he'll go back to his Royals days. Bottom line if he were still with the Royals he'd never even come close to putting up this kind of year.
Players are ALWAYS better after leaving Kc. In fact if Jacobs is cut and wins the starting role on another team I see him hitting 30+ HR easily, I really do.

—RHP Aaron Crow, in June, who grew up as a Royals fan.

Well first off since my last rant that I posted Sunday, that I actually wrote Saturday the Royals haven't lost a game and so being superstitious I've held off posting since then.

And of course the Royals won today but couldn't muster up any support for ole Zack Greinke so with him not starting for awhile and some stuff I need to say.
I hope it's not me keeping the Royals winning streak but would not doubt it if I was. I'm really special like that.

First off welcome the newest Royals pitchers, Victor Marte and Lenny DiNardo, to the roster. Every Spring Training for awhile now I've tried to pick a NRI player to root for I find it just makes it a little funner. I've been doing it now sinceI first started with Graham Koonce.
And finally two guys who I wrote about earlier in the year making it to the show.
Even got a comment from Miguel Benitez a close friend of Victor's.
So yeah those to making it up makes me feel like a proud blogger daddy kind of.
Also loving the callup of Dusty Hughes.

Now the real reason I had to post:
MLBTR has a discussion going on about the Royals. Should they accept Coco Crisp's $8mm option next year or not.
I personally say no. And here is why.
I mean he's a great guy good contact/speed/defense but his below average CF arm and his injury proneness, he's just not worth it. (Besides we have got Josh Anderson now !!!)
I think Crisp is a great guy but remember Bobby Abreu signed for less this past offseason.
IMO the Royals are better off if they cut Crisp and free up that $8m. (To sign the next Kyle Farnsworth wanna be no doubt)

And then the Kc Star shows us that Mike Jacobs is surging and all we can say is oh great, of course he would. Now Dayton Moore will have a goodish thing to say when he does the resigning press conference.

And as the Royals get hot I wish I could love on each victory but all they are doing is costing us in the higher round draft picks and giving the front office reasons why not to make any changes. Yet if Mart/DiNardo/PTBNL absolutely kill it in September who wants to bet WHEN they don't make the team you'll hear "You can't judge a player based on Septmber".
And unfortunately a lot of Royals fans forgot about that last year.

And who can blame them ? Of course every year could be the Royals year as a fan I think sometimes rationality can be lost. And in some cases it should.
Example A: If I was rational at all I'd follow another team.
Bam there you have it a great example. And of course I'm not going anywhere.

Especially not to the Bark at The K
A promotion that let's you take your canine to the ole ballgame. And you've got to ask yourself is this the Royals way of trying to undo some curse that we don't know about ? I mean seriously folks why haven't the Cubbies had a bring your goat to the park day ?
Just watch out for Strike and Rambo.
The irony of the whole thing is that in a Royals season gone to the dogs many, many, moons (insert Frank White telling us what kind of moon) ago it'll take place Sept. 27 the final home game of the season.

PS. I know there are a lot of good Pirate fans but Corey from MVN I thought of you when I saw the Pirates clinched there 17th straight losing season.
Posted by Ray W at 10:30 PM No comments:

There you have the first 20 thing Royals related that I could think of to rant about.
God Bless all of you who are still diluted/dumb enough to care.

My choice for Royals manager in 2010

Ok
I knew the game was over when Yabuta came in. Only to think twice after he somehow survived the 10th. But of course welcome back to the reality of Royals baseball. OMG he's back for the 11th. And shazzzzam a victory for the Angel Berroa's !!! I know that maybe Trey didn't want to bring in one of the new guys in a pressure situation but Yabuta ? For two Innings ?
I think a Plinko could manage the bullpen better.

Ten choices place a ballcard of each bullpen members and drop the ball. And it'll have a higher success rate guaranteed.
And why stop with the bullpen ? You could place more cards and ask it what to do at the plate !!!
Do we steal ? Hit and Run ? Sac Bunt ?
Ask Plinko !!
Who should be in the starting lineup ?
Ask Plinko !!
What should the batting order be ?
Ask Plinko !!
And unlike a Magic 8 ball you won't look like a 7 year old girl shaking it. Just have the bench coach drop the phuck er puck.(My bad)

And of course the post game interviews. How fun will they be ?
Well the answer is very see the Royals could hire a couple great writers one writes and angry speech, one sarcastic, one nonchalant, one funny, etc. And then bam which one will manager Plinko choose ?

Mr. Plinko
My choice for Royals manager in 2010

And the only thing he had to say on his FB:

Only been with this organization for 1 day and its 10 x's better than KC.

And I can't blame him, but really we trade one of the best pitching prospects who admitted had some problems.
But the Royals are running a baseball team not a church.
I'm sorry but all that matters is WINNING !!!

(And I whine to anyone who listens about that)

Unfortunately the Royals don't really care about that....

At least the good news is with Bale and Farny biting the injury bug maybe Disco or Marte will get a call up but I doubt that they really do.

Bale bales water in, instead of out to sink sinking Royals.

Ok couldn't help it.
If you can't make the highlight reel at least you can own the blooper reel, right ?
I mean who thinks the Royals could totally kick butt on America's Got Talent as the clown act ?

I mean they'd be grrreat. They'd defiantly make the guy who stapled dollar bills on his head, and left a cinder block with his nipples, look like just another walk in the park.
Seriously how many times have you seen a play like the one that happened ? Not even in the Parks and Rec league my friends.

Well that's about all I've got hopefully will get a second wind when some of the extra players start to come up. (Sorry Jose Guillen does not count.)
Also yesterday I voted for Victor Marte for what it's worth.
Posted by Ray W at 8:35 PM No comments: