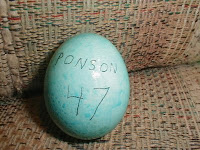 An Easter project of our favorite Royals starting Pitcher who has pitched fairly well and really surprised me especially this last time out.

Couldn't have a picture of Ponson and not Farnsworth could we ? So yeah that ^ 's Farny

Alex Gordon is headed to surgery on his Hip my grandma had hip surgery in January. Royals called up Mitch Maier from Omaha. Teahen will play 3B .

You know with every new season there are a lot of new Royals blogs if you are one shoot an email and I'll link you. Of course many don't survive that first year unfortunately for you mine did.

Finally way to go on your grand slam Buck usually after a Royals player gets his third HR it's already late June.

Also on Home Run's Jacobs has some serious power, but his defense is so bad he should only DH And he still looks like crap with that wad of junk in his mouth I know Greg Schaum said we'd dig him but I ain't going to come around until he learns when it comes to a full mouth less is more.

And because I'm still on the computer I went by Sonic today and picked up a Sonic Slam inning drawing thing. It'll be in the mail tomorrow wish me luck.

And still I'm working on a header I have an idea and it's hand drawn on a paper. But the move from paper to computer isn't an easy one.