The 28 year old Marte spent the last three years pitching in Japan for the Hiroshima Carp.

Marte came up through the Carp’s Dominican Academy and the Royals are only his second pro team.
While playing for the Carp over the last three year Marte appeared in 30 games posting an 0-2 record, an ERA of 6.16, a K/BB of 20/17 in 30 2/3 innings. Once again this is over the last 3 years. His stats here.

According to a translated wikipedia:

has heavy straight and the slider whoose,(sic) the knucle (sic) pitch style of the sale.

Ok so that doesn't make a whole lot of sense at all.
Greg Schaum host of the radio program "BBTW" had this report:

He pitched very well in the Dominican Winter Leagues and has a very live arm with heavy action on his fastball.

this is what he throws....fastball, slider, curve, change and getting a splitt down...he told me he throws 95-96

He has gained some weight and should start the season at AA or AAA and could be a dark horse for the Royals around mid-season should an injury occur. 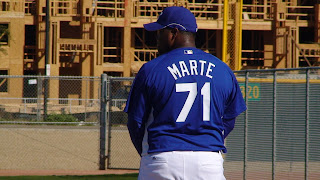