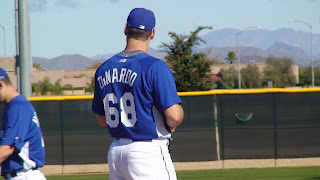 THE START
Lenny was drafted by the Red Sox in the 10th Round out of High School in the 1998 amateur draft, he did not sign though, but instead went on to college and played for Stetson "The Hatters"

He was then drafted by the Mets in the 3rd Round of the 2001 amateur draft.
He signed July 14, 2001, and made his pro debut with the the Mets Single-A affiliate Brooklyn Cyclones. After going 4-11 in the 2003 season between High A and AA, but with a nice 2.52 ERA he was selected by the Red Sox in the Rule V draft September 15.

2004 His first MLB year
He started the season on the DL and made his major league debut on April 23 against the Yankees in New York pitched 1 inning facing three batters and collecting a strikeout.
DiNardo would go on to spend much of the second half of the season on the disabled list.
But still received a World Series ring for his contributions to the World Champion Boston Red Sox.
Final 2004 MLB stats:
0-0 record 22 APP 27 .2 IP 21/12 K/BB 4.23 ERA

In 2006, DiNardo made six starts in place of the injured David "Boomer" Wells. However, he spent a lot of time on the disabled list himself, due to a neck injury. DiNardo also pitched for team Italy in the Inaugural World Baseball Classic. Overall he had problems with control and had a bad year.
Final 2006 MLB stats:
1-2 record 13 APP 6 GS 39 IP 17/20 K/BB 7.85 ERA

But last year like most of the Athletics team DiNardo struggled and finished the year with a 7.43 ERA.

"DiNardo is a very crafty lefty. His stuff does not blow you away, but he really knows how to pitch. He changes speeds, he has a good changeup, he's tough on righties with his changeup. If he sticks, it will be as a left-handed long guy. A guy to turn a lineup around."- Theo Epstein's scouting report on Lenny

Quick DiNardo Facts and such:

What was Gammons doing at Suprise with Dayton Moore ??? 
Top photo from lighthittinginfielder.com
Bottom Photo From "Boston Dirt Dogs" Lenny in middle sandwiched between Epstein and Gammons
Posted by Ray W at 10:18 AM